That is how the then six year old daughter of speech scientist Rupal Patel described the work of her mother. Incredible work that is giving a voice to the voiceless.

Over ten million people worldwide are unable to speak. They may be victims of stroke, Parkinson’s Disease, cerebral palsy or a traumatic brain injury.

As a voice actor, I cannot begin to imagine what it would be like to be unable to speak. It is not only my livelihood; it is how I express myself, share my emotions and connect with those I love. It is something I have always taken for granted until I watched Patel’s Ted Talk (I’ve whacked a link to it down the bottom. Highly recommended viewing).

She explained how those who can’t speak often rely on text-to-speech devices to express themselves. Yet regardless of gender, age or disposition, many speak with the same voice—having just a handful of generic, synthetic voices to choose from. 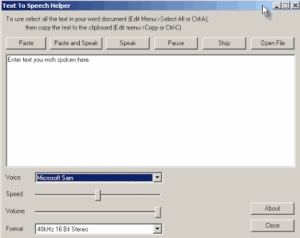 This lack of individuation of the synthetic voice really hit home when I was at an assistive technology conference a few years ago, and I recall walking into an exhibit hall and seeing a little girl and a grown man having a conversation using their devices, different devices, but the same voice.

This was the driver for Patel to develop a new technology that can reconstruct voices. VocaliD creates custom speech patterns that sound like the original person’s voice.

The technology extracts sounds from the person who is unable to speak (the ‘target talker’). While they may not be able to form words, the target talker can usually still create sounds and modulate pitch, loudness and tempo. They just can’t filter those sounds into words.

That is the role of the voice donor—to act as that filter. Donors record a few thousand raw speech utterances to a ‘voice bank’. These utterances cover a range of sound combinations that create a data set capable of building sentences.

The target talker is matched with a suitable donor—usually someone of a similar size, age, ethnicity and accent and the same gender. VocaliD blends the target talker’s sample with the donor voice. This creates a unique synthetic voice which sounds like the target talker with the speech clarity of the voice donor.

And here’s where it gets really exciting. Anyone can be a voice donor. And you can do it from your own home—you just need a computer. It takes a few hours of recording that can be broken up into shorter sessions.

I’ll leave you with the gorgeous Voice of Goldivox animation calling for donor voices (warning: you just might …)